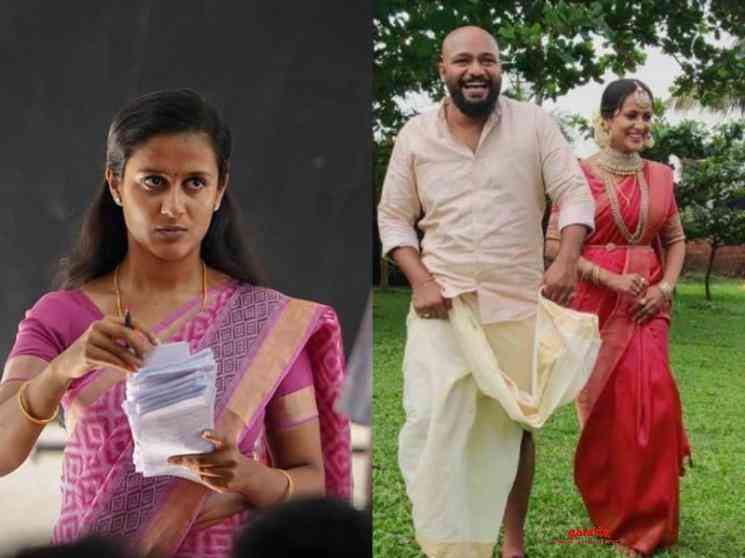 Malayalam actress Binny Rinky Benjamin got married to Anoop Lal on Friday as per Hindu traditions, with the reception being held at a private resort in Kochi as per the COVID-19 norms. The popular actress shared the happy news on her Instagram page along with a picture of herself with Anoop, who as well is working in the Malayalam film industry. Having made her acting debut in 2017 in the box office blockbuster Angamaly Diaries, Binny Rinky went on to star in Janamaithri and Thanneer Mathan Dinangal last year. With Binny Rinky Benjamin and Anoop Lal now married, pictures of the couple from their wedding ceremony have gone viral on social media. A special wedding and reception video too has been released on YouTube. with wishes pouring in for the newly-wed couple for a happy lifetime together. View this post on Instagram A post shared by Binny Rinky Benjamin (@binnyrinkybenjamin) Binny Rinky Benjamin appeared as Sakhi, one among the three love interests of Antony Varghese in Angamaly Diaries, who breaks up with her after his character in the film lands in trouble in the hands of the law due to a violent incident. Her role despite being a short one, was important in the film, which was directed by Lijo Jose Pellissery. Having garnered a good fan following, she then played an important role as in the Saiju Kurup starrer Janamaithri, followed by her most notable performance being the 2019 film Thanneer Mathan Dinangal. Appearing as the Physics teacher Bindu in the coming-of-age romantic comedy, Binny Rinkys performance fetched her appreciation from fans and critics alike. Directed by Girish A. D., Thanneer Mathan Dinangal turned out to be a box office success and was lauded for its handling of the subject of love during school days in a clever and relatable manner. Below is the Binny Rinky Benjamin and Anoop Lals wedding and reception video:.
Malayalam actress Binny Rinky Benjamin gets married, wedding pics and video go viral. This article is published at 21 December 2020 05:52 from Galatta Malayalam Latest Film News stories, click on the read full article link below to see further details.