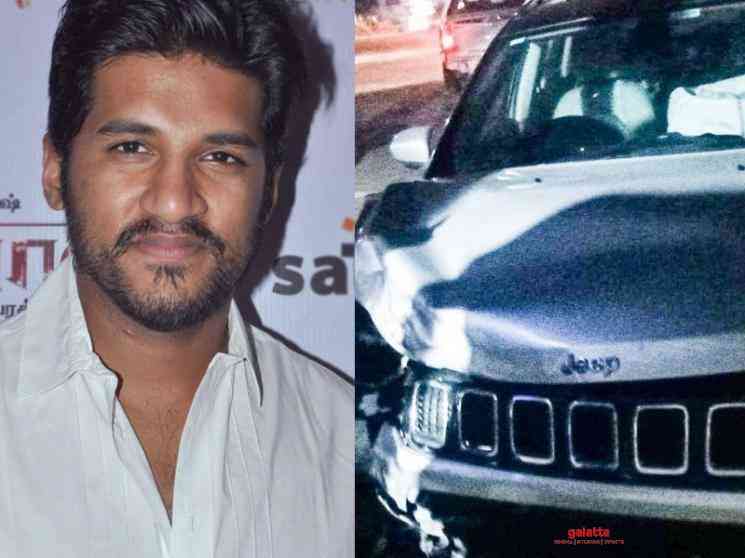 According to the latest reports, popular singer and actor Vijay Yesudas met with an accident on Monday night. Fortunately, Vijay escaped unhurt. Vijay Yesudas, along with his friend, was traveling towards Kochi from Trivandrum, and around 11.30 PM in the night (November 2), their car rammed into another car at the highway in Thuravoor in the district of Alappuzha. As per the reports, the other car entered the National Highway from Thaikkattussery Road and collided with Vijay Yesudas car. The front part of both the cars was severely damaged and the pictures from the accident spot are now doing the rounds on social media. No one was injured and it has been clarified that everyone is hale and healthy. Popular writer and director John Mahendran (of Sachein fame) took to his Twitter page to express his relief about Vijay Yesudas safety. He tweeted, @IAMVIJAYYESUDAS Glad, you are safe Vijay,. The damaged vehicles were later removed from the spot. Police officials from Kuthiyathode Police Station arrived at the spot after hearing about the incident and sorted things out. More details regarding the accident are awaited. Vijay is also yet to share a statement regarding the same. Vijay Yesudas was recently seen in the wedding event of actress Mrudula Murali who got married to her longtime beau, Nitin Vijay. A few weeks before, Vijay Yesudas made it to the headlines after he announced his retirement from playback singing in the Malayalam industry. He stated that the singers in the Malayalam cinema industry do not receive proper recognition. Vijay Yesudas is the son of legendary singer, KJ Yesudas and he made his debut as a singer with the Malayalam film, Millennium Stars. Vijay Yesudas has sung several songs in Tamil, Malayalam, Kannada, and Telugu. He made his silver screen debut in Tamil cinema as an actor with Dhanushs Maari, in which he played the role of an antagonist. Following that, Vijay acted in the Tamil film, Padaiveeran in which he was the main protagonist..
Singer Vijay Yesudas meets with an accident - escapes unhurt | Breaking Details here. This article is published at 03 November 2020 05:04 from Galatta Malayalam Latest Film News stories, click on the read full article link below to see further details.